My very first radio drama, Here For You, is now up on YouTube for your own listening pleasure. I hesitated for a second because some of the production quality is a bit ropey in places, but hey, we were new to the game! Here she is:

This was my very first toe-dip into writing and directing radio drama, now four years ago. It was first broadcast on my student radio station, Bailrigg FM, on 14/05/15, and won their annual award for 'best one-off show'.

Here For You is about three university friends, who I imagine look like the three members of Pulp do in the middle of the sleeve for Common People (the image is framed in the artwork for the play, and the song features in the story).

The drama was edited by Jamie Mills and Daniel Snape, and starred Alicia Holdsworth, Alexander Varey and Christopher Irvine. You can hear me and Jamie chatting about it, among other 2015 nonsense, here. 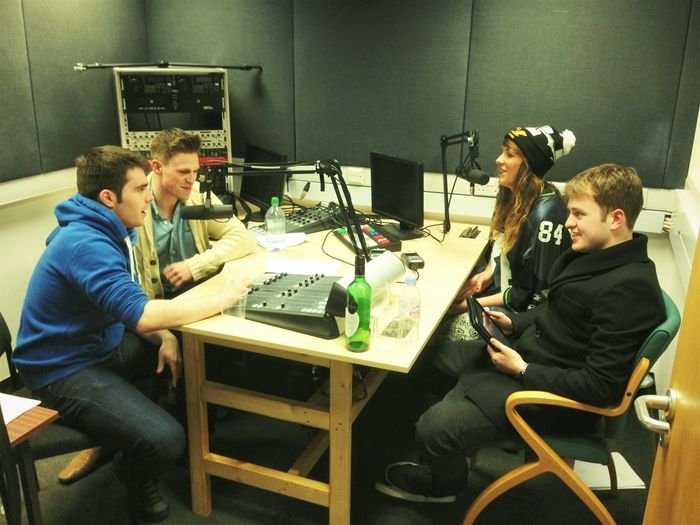 Recording Here For You back in 2015: Christopher Irvine, Alexander Varey, Alicia Holdsworth and myself.

The main reason I've just uploaded this is because I've been made aware that Bailrigg FM is soon to lose its FM licence, thanks to some smart alec at the students' union who's no doubt never stepped foot inside the state-of-the-art studios on campus which become many students' second home.

This decision needs to be reversed. Not for just for legacy's sake (Bailrigg is the country's first FM student radio station, now 50 years strong), but because being an FM station, as opposed to digital only, is what makes it a 'proper' radio station in the eyes of many. And in a lot of ways, rightly so - as an FM station, Ofcom rules have to be adhered to, meaning it can never be used as a place to piss about, but rather, as a respected student broadcaster where young creatives are working out how to make radio.

And that's exactly what Bailrigg has been, for myself and hundreds of others: a chance to step up and have a go, learn the rules, experiment, broadcast on the airwaves, and, if it's something that's proving enjoyable, a place to prepare for a career in an industry which follows all of these same rules. It's a lot harder to come across those kind of opportunities after you graduate, and so it's a tragedy that pencil pushers are threatening to take away a part of Bailrigg's legitimacy that has been helping to kick-start radio careers for half a century.

If you agree (or even if you just enjoyed Here For You, a product of the station) please do me the kind favour of signing this online petition to try and make said pencil pushers change their mind: http://chng.it/5drvfH4ZDC