I recently had two plays performed in London in the space of a week. They were both shortish pieces as part of themed evenings of new writing. Had this site been up and functioning at the time I'd have put a post up in advance with a link for tickets, but alas, the way I've drawn out getting this thing to go live has only allowed for an 'in review' post. So here's what you could have won: 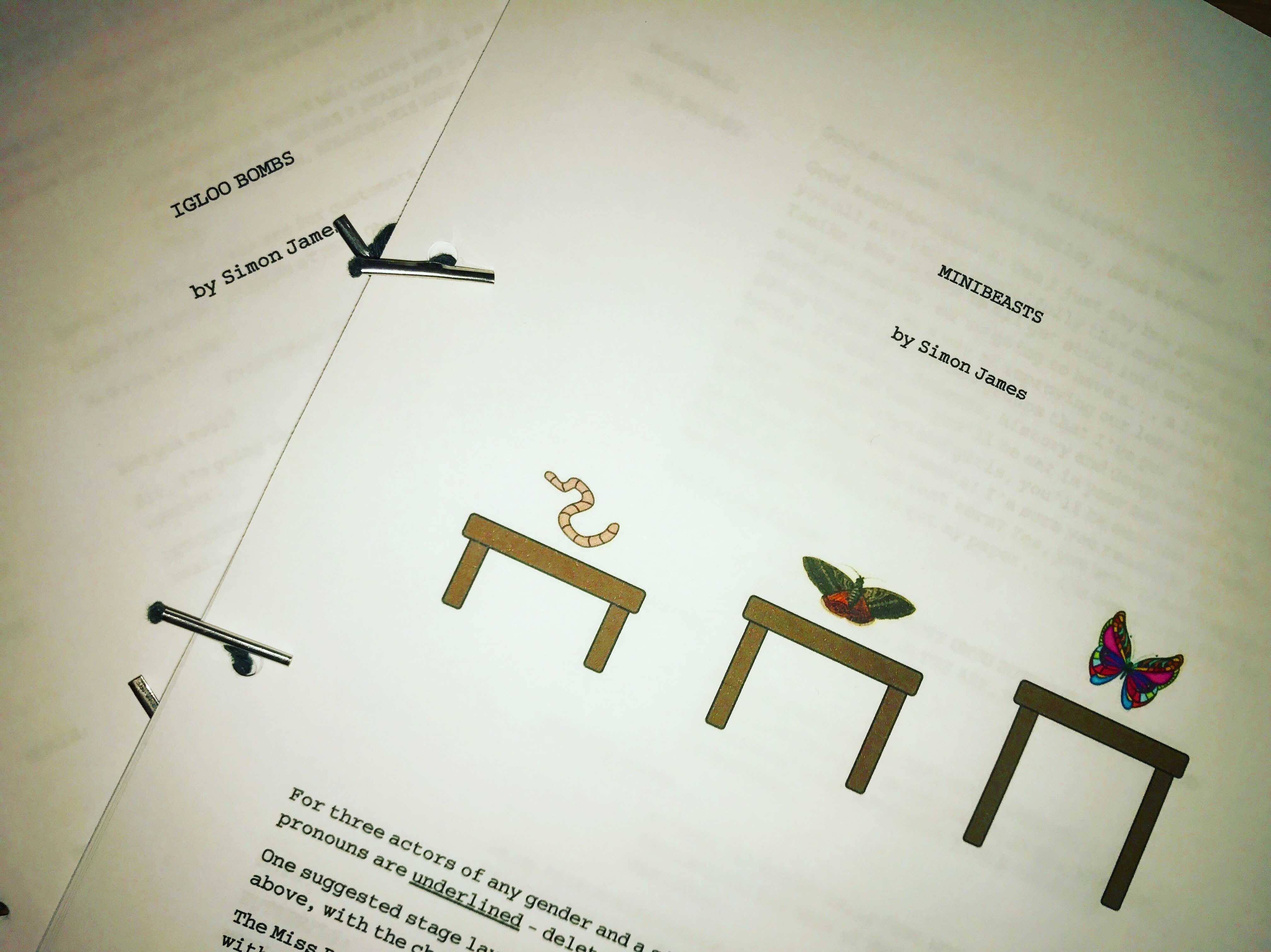 On February 4th, Actor Awareness put on an evening of plays concerning 'class', at Spotlight Studios just off Leicester Square. Actor Awareness champion working class talent - as a mark of this they played Oasis on loop throughout the interval which is the sign of an excellent evening if ever there was one.

My performed play, Minibeasts, follows three primary school friends who are split onto different tables because of their teacher’s new ‘minibeast’ labelling system: they are now butterfly, moth… and worm. After quickly working out the hierarchy of the learning groups, they start to realise that their designated minibeasts may be a more permanent part of their identity than they first thought...

This was Minibeasts' first outing, as directed by the talented Kerry Fitzgerald who was longlisted earlier this year for the Funny Women in Comedy Writing Award. Kerry cast the piece to star Valerie Antwi (Romeo and Juliet - National Theatre tour) as Butterfly, Rosie Jane (Doctor Who) as Moth and Tom McNulty (Great Expectations - East Riding Theatre) as Worm. All of them rocked it. Oh and there was also a sneaky cameo from my better half Hannah, getting her 'teacher' on as Miss Bailey - she rocked it too.

Of all the plays I've had performed, Minibeasts might be the one which I am the proudest. This was consolidated by a unanimously flattering response to the script (and the team's great work) - Jon Brittain (writer of Rotterdam) said it 'elegantly encapsulates the problem with schooling' and Michael Singleton (founder of Mixing Networks) said it had a 'great structure and metaphor' and that it was 'important, funny and charming'. With praise like that it would be somewhere between wasteful and irresponsible to just use this script as a coaster going forward, so I am pleased to confirm that this is not the last the world has seen of the Minibeasts - keep your ear to the soil later in the year for more news thataway.

After the depressing end of Minibeasts' debut (depressing not only for having a dismal conclusion, but also because it marked the end of a night of wonderful theatre), we headed to a nearby Slug and Lettuce. I include this detail not to show that I am a massive LAD who loves to bathe in the bubbles of Estrella, or because slugs are thematically linked to the play, but because there's a mini-anecdote which will be of interest to those who enjoy the phenomena that is 'the coincidence':

At the bar I ended up chatting to an actor-sort called Toby who was friends with some of the Minibeasts. I asked him if he was due to perform in anything soon, and he told me that later in the week he was set to play a man called Frank who's been living in a bunker for 32 years (a role he was growing his hair for) in a new duologue called Igloo Bombs. I told him it was me who wrote it before he had the chance to start slagging the script off. 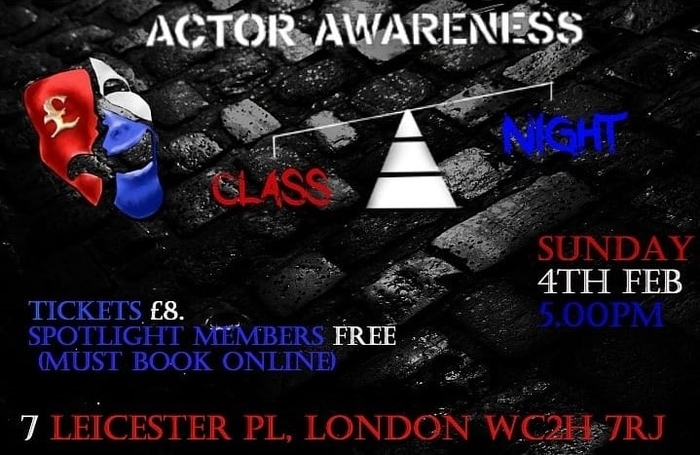 It sounds big-headed and hyperbolic, but very very occasionally I write a script for a specific brief which I feel I 'know' is going to be chosen for that respective performance/publication. My comic for the Millarworld Annual was one such script, and Minibeasts ^ was another. Both of these were written in one day. And these script 'wins' always seem to be through no skill of my own - stories which fall almost instantly onto the page and are of a shock to me as I read them back, as if they came from somewhere else. I mention these occasional gems in comparison to the vast majority of what I write, that being a script I have meticulously slaved over for months and months, rewriting every line of dialogue to the point of overthinking until it gets changed to what it was in a previous draft.

Igloo Bombs was neither of those things - not a painless spill of inspiration onto the page or something I considered 'crafted'. I was driving home the morning after a heavy poker session feeling a little worse for wear, and, aware of a brief which had crept up on me ('write a short play which showcases an original utopia or dystopia'), I was very clinical in my approach to plotting and scripting. I forced it out of myself in one day, and to be honest, was not particularly proud of the result when I sent it over that same night. A very unexpected surprise therefore, when Brave New Word got in touch to let me know that Igloo Bombs would run for a couple of nights at their Utopia/Dystopia evening at the Arcola in Dalston.

I opted for dystopia because I'm not naive: After thirty-two years hiding in a nuclear bunker, Frank Tapster emerges to find that Britain, and the world, has completely changed. Everywhere trades in either dollars or Korean won and you can't walk outside without spontaneously combusting. But what's really set to break Frank's heart, after waiting so long for an Americano, is being served the new abomination referred to as coffee.

Considering the circumstances in which it was written, I can honestly say I was shocked and delighted at how Igloo Bombs turned out. My new friend Toby Osmond (Channel 5's Henry VIII and His Six Wives), and the wonderful Holly Ashman (Our Big love Story - recently seen at the Hope Theatre) not only brought the play to life, they heightened the entire thing. I'd pulled the fictional dates out of my hungover arse, and yet, as he told me in the Slug, Toby had grown his hair to try and live up to the timeline I had created. This juxtaposition goes some way to highlight how much my actors put me to shame on this one.

Sitting in the audience alongside Rosie/Moth from Minibeasts added a nice cyclic end to a few days of performances. Particularly as I'd gone with my friend Greg, perhaps the biggest Doctor Who geek there is, who tried to 'keep his chill' by pretending not to recognise her as Bill's Mum... 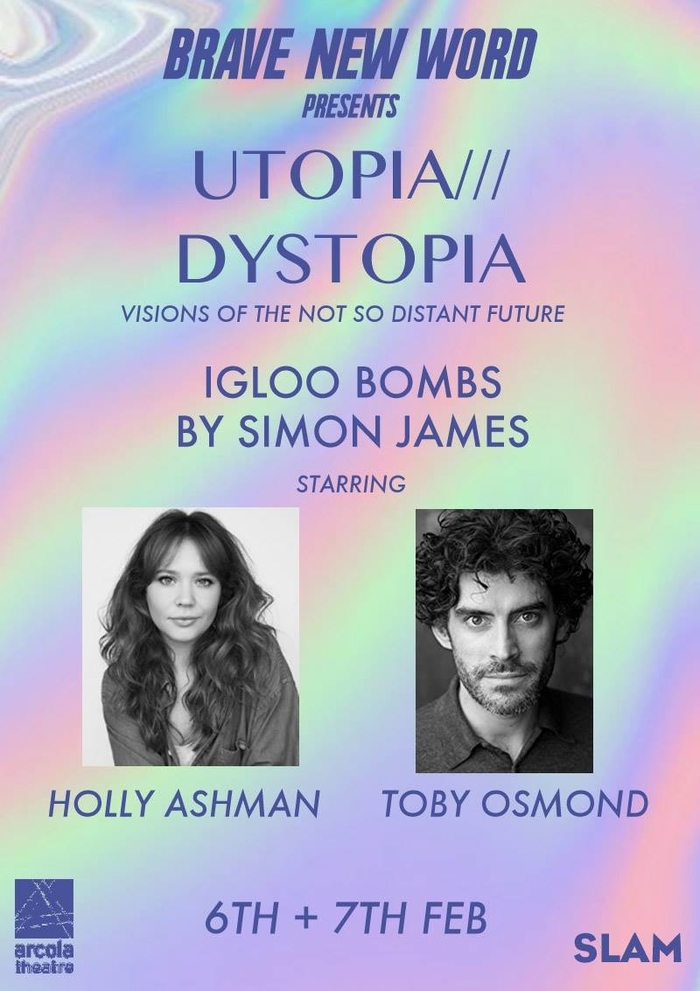