The Sex Zone is a new sensual comedy dualogue which is being put on as part of LGBT Pride New Writing Festival at Bradford Playhouse. I've already made a post about that one here (this was before I knew Saturday was going to turn into a national campaign to get people sitting up all across the country...)

At the exact same start time, Igloo Bombs (a play I wrote earlier in the year) will be staged on Saturday night as part of the Cardiff Fringe Theatre Festival (my first play to be shown outside of England). Three scripts have been chosen to be performed at the Festival's closing ceremony, and one of the three will win the Ticketsource Best Script Writing Award (essentially cash and a trophy), judged by a panel of professionals on the night including Bad Wolf Productions. My competitors are Odd Ones In by Claire Boot and Binary by Phillipa Mannion. Pro actors will rehearse the plays throughout the day and deliver them in a live script reading in the evening at the Gate Arts Centre, more info here.

The final Saturday performance to mention is a bit of a smaller affair (in terms of my own contribution anyway) - a single poem, Sonnet for a Rose, will be performed in London. It twists a tradional sonnet into one from the perspective of a sociopathic stalker, and will be delivered for the first time as part of SLAMinutes talks about Sex at the Pleasance in Islington (tickets here).

As happy as I am with the poem, it's just 14 lines, so if you wanted to watch something substantial of mine you will be choosing between the two plays, which both begin at 19:30. Which to go to? Well Igloo Bombs won't cost you anything to get into but The Sex Zone involves a live oral sex scene; perhaps this is the ultimate test of money vs sex as motivators. In fact, the audience attendance figures for each might prove very useful to me in terms of character motivation going forward...

Here's the map of all three theatres, which if you were to walk between would take 7.5 days of non-stop plodding. And yes, the shape the route created does indeed confirm my illuminati membership, but I have no shame in this. Lizard and proud. 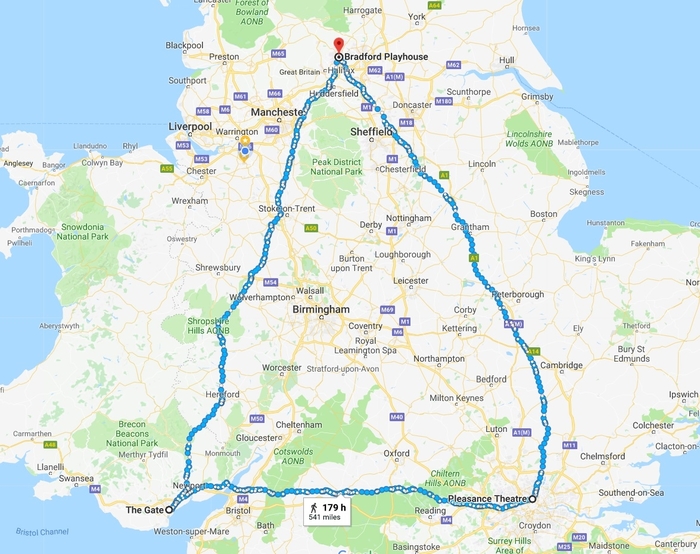