The Toad in the Hole comes to Manchester 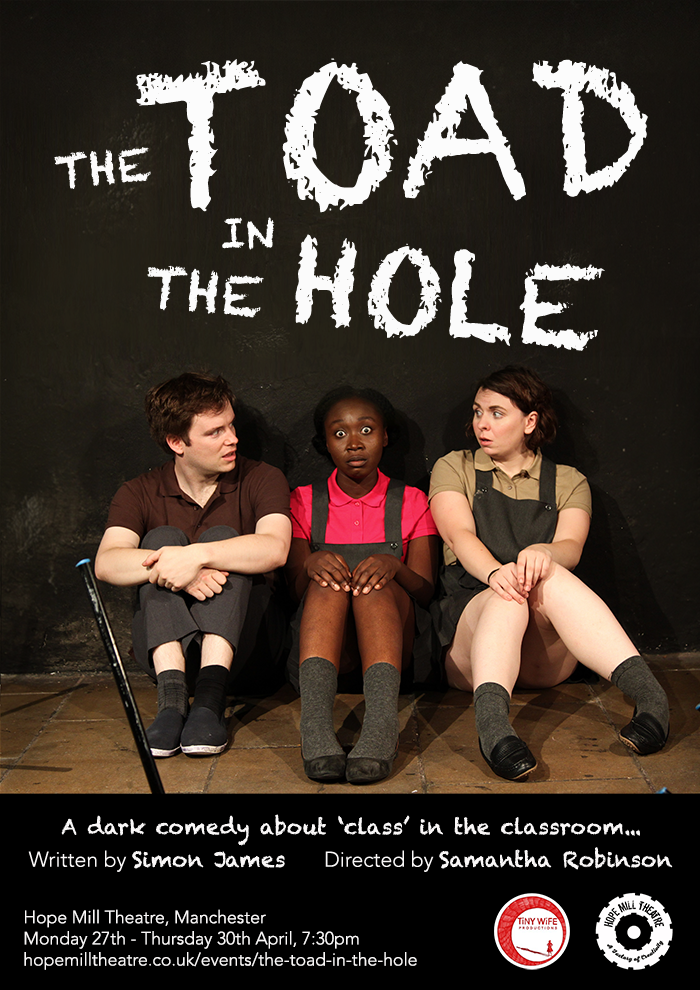 Due to the global COVID-19 pandemic, I am sorry to say that the below has now been delayed until 2021.

My playful but concerning stage show, The Toad in the Hole, is heading to Manchester.

It will be the very first theatre production I've brought to my home city. It’s the most personal play I’ve ever written and the one I’m most proud of… so fingers crossed it goes down well with those who call barm cakes mint.

This well-received dark comedy will run for four nights at the beautiful Hope Mill Theatre in Ancoats, from Monday 27th April – Thursday 30th April. Tickets can be bought here. They’re cheap, there’s free parking, a bar, AND the play is only an hour long so you won’t drift off (although I like to think there'd be no danger of that!). What more could I say to sell it to you?? Oh, you want to know what it’s about…

The Toad in the Hole follows three primary school friends who have found themselves split onto different tables, all because of their teacher’s new ‘minibeast’ labelling system: they are now Butterfly, Moth and Worm. But while the trio are working out how the hierarchy of their new learning groups could have a negative impact on social order, there’s a much more immediate threat on the way, creeping ever-so-slowly from the corner of their lives. Will they spot it before it’s too late?

To celebrate Toad coming up North after multiple London runs, here’s an exclusive clip from nearly 2 years ago when our director Samantha Robinson was interviewed on London Live. She had only been working with us for a couple of weeks, so did a great job of looking like she knew what she was talking about. Sam was less prepared, however, when it came to her outfit: she wore flip flops thinking it was going to be a radio interview – little did she know she would be on Freeview channel 8 all across the capital…

Sam is returning to direct once again but in boots this time, with Camille Wilhelm assistant-directing. The play stars Natalya Micic as Butterfly, Nicola O'Keeffe as Moth, Tom McNulty as Worm and Sorcha Dawson as Miss Bailey. It will also feature live music, composed and performed by Roel Fox.

In case you missed it earlier, here’s a link to buy (or at this price, ‘steal’) tickets: hopemilltheatre.co.uk/events/the-toad-in-the-hole. If it's going to take one more piece of content to convince you to come, then you expect too much. But I've got you covered anyway - here's a video featuring interviews with myself, Sam and the cast: